The big work for this summer is the installation of an M-Square 40M4LLDD.  This is a 4 element linear loaded design with dual driven elements.  It has a 42’ boom and the longest element is 50’ tip to tip.  It weighs in at about 150#.  See my tech note on balancing big antennas for some pictures of it on the ground under construction. 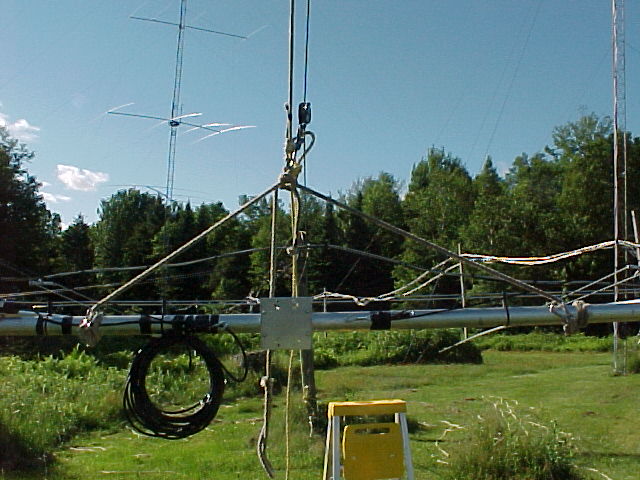 This is the rigging getting ready to lift.  Note that I used a large rope tied to 2 places about 6’ apart on the boom to spread the lifting force a bit.  This also keeps the rope clear of the boom-mast plate which makes putting U-bolts in a bit easier.  The ropes are attached to the boom in a way that will force the elements to tilt upward toward the tower when the antenna is lifted to make it easier to get over guy wires. 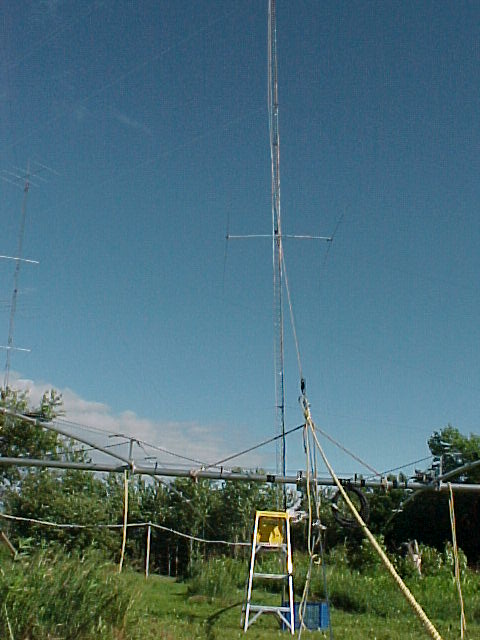 The view toward the tower shows the two tag lines, notice that they are tied with large bowline knots so that the knot can be untied and the rope removed from the boom while up the tower easily.  What can’t be seen from this is that the antenna is backwards.  The reflector is on the left in the picture, but when it is up on the tower the reflector has to be to the right.  This is because I want to put the antenna on the far leg of the tower pointing the opposite direction toward Europe. You also can’t really see that the tram cable goes up to the guy bracket at 140’, but the antenna is destined for just above the 105’ guy bracket. There weren’t enough people when we did the liftoff to get some pictures.  Basically I first untied the temporary rope that was keeping the lifting line from pulling the antenna off the tripods while someone held it back.  Then I increased tension on the tram line which actually lifted the antenna off the tripods so we could check the balance before sending it up.  The balance was good so the Jeep in 4wd-low backed up from the tower to pull it up. 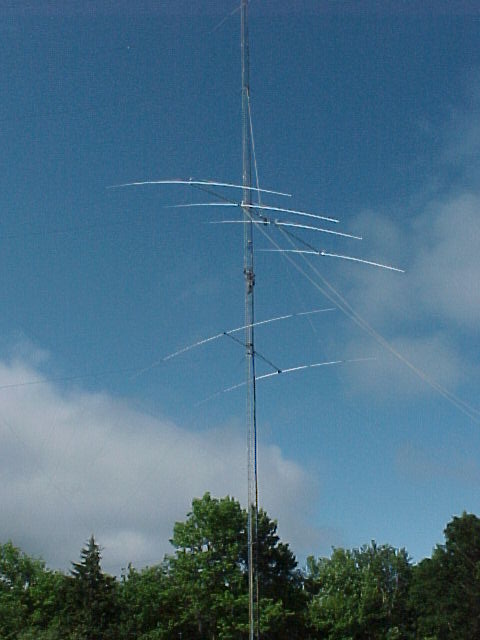 Once it was above the 105’ guy bracket the tram wire was loosened so the antenna swung in toward the tower and came to rest on the guy wires just below the bracket. 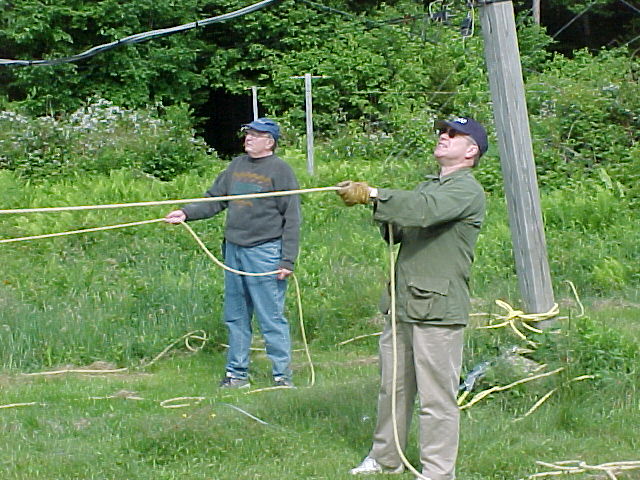 Here is the tag line crew hard at work. Once I was up the tower the Jeep pulled the antenna up to its final height. 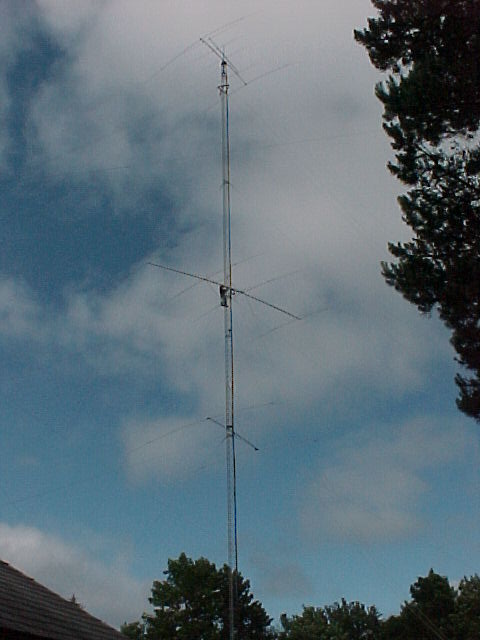 Once it was above the 105’ guy bracket the tram wire was loosened so the antenna swung in toward the tower and final height. 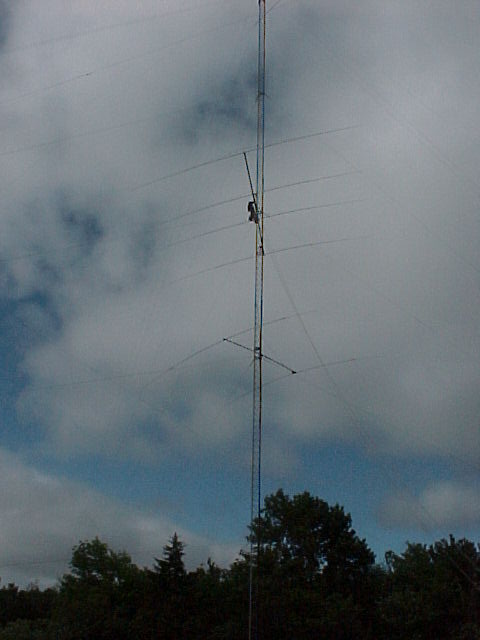 I then swung the antenna around the tower. 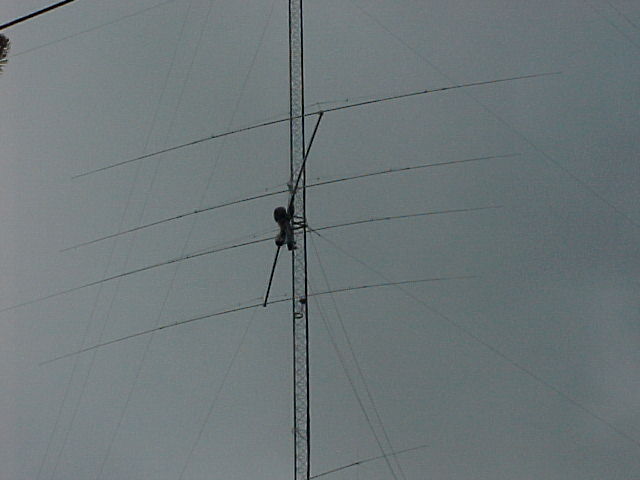 Now its pointing the right direction and the boom-mast plate is on the right leg of the tower so I put in the U-bolts. 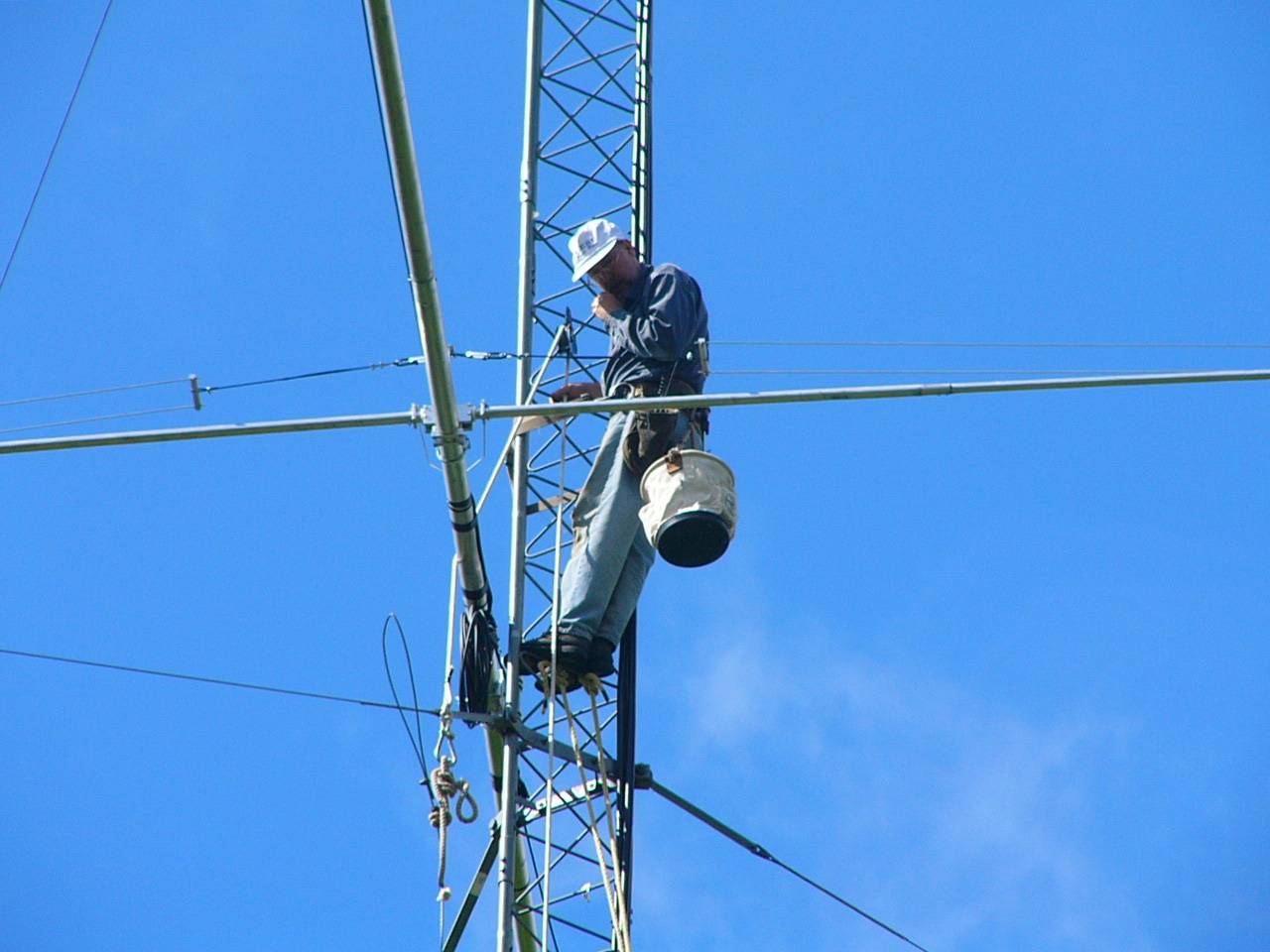 After the U-bolts were in it was time to remove the tram line and tag lines. 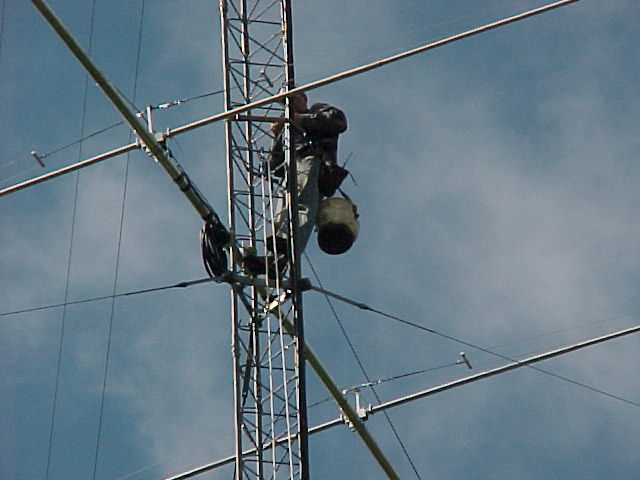 Then it is time to install the boom brace. I connected the coax and came down to release the supervisor 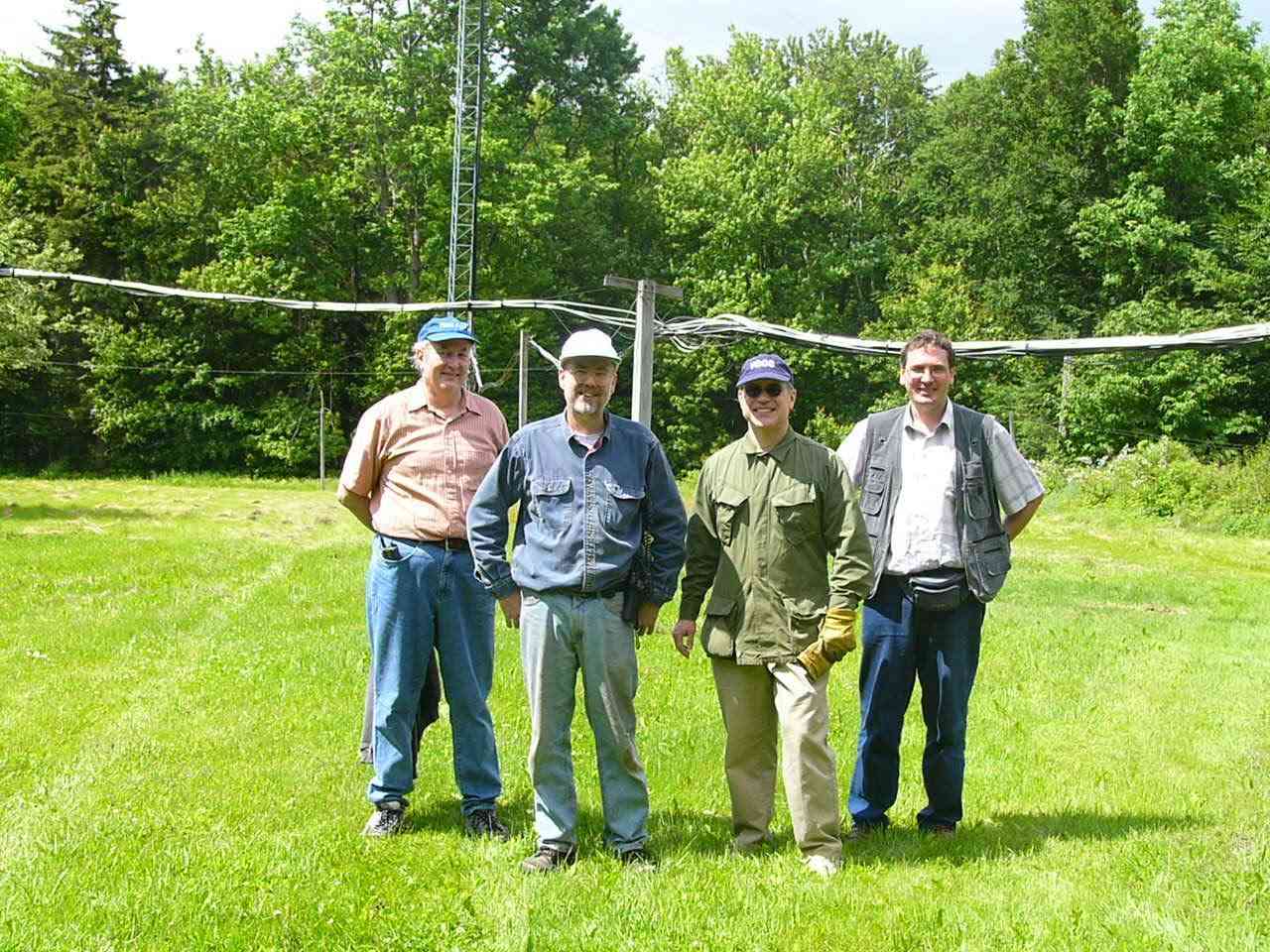 A regional meeting/picnic for the Yankee Clipper Contest Club was held on at the station of Robbins, K1TTT in , . The picnic started a little before the scheduled start. A brief business meeting began at approximately to vote on several new member applications.

Tours of towers and antennas were conducted.  These included discussions of construction techniques, grounding, stack design and switching.  There were also demos of tower tools, how to install deadends, and other tower stuff.

s new deck is a great place to hold a cookout and view the extensive antenna farm. There were plenty of burgers and hot dogs from the grill and lots of other good food.

This was the largest crowd ever to visit the recently established Berkshire Insulator Gallery.

We were pleased to have YCCC Vice President, Brian Lambert, N1IK in attendance. There were twenty-nine YCCC members attending, including our new members.

Pictures: (Note that all pictures have been forced to 240x320 on this page for easy viewing and labeling.  Most of them have higher resolution available if you save them on your computer and view from there.)

N1MM in charge of the grill.

Some of the other chow hounds.

Feedlines exiting the back of the shack.

Feedlines for some of the towers.

Demo of how to properly install a deadend.

Big view of towers and house.

40m and SO2R (other radio and amp not installed) station.

WA1LY taking a break from the festivities.

N1IW's Catch of the day.